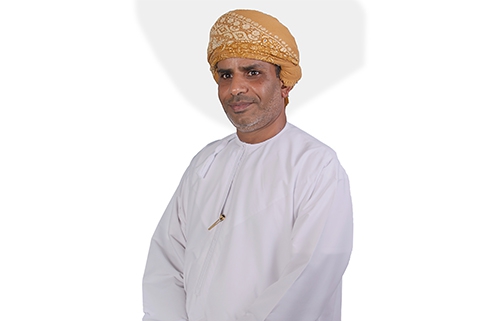 Muscat, June 27 2021: Mahfoudh Al Rawahi spent over three decades at Oman Arab Bank, moving from one position to another until he reached his current position as Head of Central Operation at the Bank’s headquarters. Mahfoudh began his career with OAB in 1988 as a Teller, following his graduation from the Institute of Vocational Training, Accounting Division. Over the course of the following years, he proved himself as one of the most prominent national competencies, showcasing sincerity and determination to achieve success. He maintained this position while completing his academic career, graduating from Waljat College with Bachelor’s degree in Business, while still working as a Teller. This drew the attention of the Bank’s management, who paved the way for his career advancement.

With regard to his experience at OAB, Mahfoudh Al Rawahi said, “Ever since my first days at the Bank, I have found support from the management, who were keen on enabling the young national workforce to enhance in the banking sector. Work was challenging and we, as Omanis, had to prove our ability to perform well in a sector that was the backbone of the economic development in that particular period. Thankfully, I was able to demonstrate my capabilities and within only two years I moved up to manage Customer Service and Remittances, for two years. After which, I was positioned at the Accounting Department and worked there for 3 years.”

Following this, the Bank’s management decided to send him to Jordan to study for a specialised banking diploma at the Arab Academy for Banking and Financial Sciences (AABFS).

“Upon completion of seven years at the Bank, the management decided that I was qualified to take on a higher position and greater responsibilities. This led to the decision of my appointment as an Assistant Branch Manager at one of the Bank’s branches. I worked in that position for 4 years, during which I moved to two different branches to gain more experience. Following this, I was promoted to Branch Manager and performed my duties for 11 consecutive years, shifting between four major OAB branches. With the establishment of the new branch structure, I was then appointed as the Deputy Regional Manager for OAB branches in the Governorate of Muscat. I held this position for three years before moving into the Department of Retail Banking to be responsible for the Branch Operations Section for a period of two years. And this is where it has led me, to my current position as Head of Central Operations” he continued.

Commenting on empowering the national workforce as part of the Bank’s vision, Rashad Al Musafir, CEO of OAB, said “Since its establishment nearly four decades ago, the management has been determined to enhance the Bank’s workforce. This is possible with the introduction of qualified national competencies who are capable of enhancing their performance by complementing the human resources growth and development strategy set by the OAB management. It includes the implementation of programmes and plans that utilise scientific techniques and various learning methods that focus on practical implementation, selecting suitable people, as well as investing in modern technologies to establish a culture of learning and performance development. The leadership development programme “LEAD”, which was implemented in 2017, is an integral part of this strategy, focused on honing the talents and skills of nationals and preparing them to take on greater responsibilities within the Bank’s executive management. Three editions of ‘LEAD’ have already been successfully launched, which witnessed 60 leaders who underwent intensive training courses for six months, in cooperation with an institute specialised in management sciences. The Bank’s management has continued to pave the path for them by enabling their participation in work teams that implement various projects around the concept of a non-routine ‘flexible’ institution. This is in addition to encouraging their participation in the Bank’s initiatives, with some of them having assumed leadership positions after graduating from the ‘LEAD’ programme. Therefore, today we stand here proudly, reinforcing that the role of our national competencies is prominent in various disciplines and work sites. We consider them our most important assets at Oman Arab Bank, and a source of our confidence and pride.”

“The experience of our colleague Mahfoudh Al Rawahi is a testament that competency and determination is the path to professional development and building a promising career. I am confident that Mahfoudh’s success story will inspire many of his colleagues who have just begun their careers and looking to hold higher positions, not only at OAB but wherever they may be. For us at OAB, we are proud to have Mahfoudh and his colleagues be a part of our team. The team strives to provide only the best services, aligned with the Bank’s strategy aimed at positioning OAB at the forefront of the local banking sector,” he added.

“The advancement in one’s career is not solely dependent on the number of years as some may expect. Instead, it takes will and determination to achieve success and constantly acquiring more knowledge and experience, to be able to perform better every year. This is further enhanced by a supportive work environment, similar to the one OAB provides its employees. I wish all the youth in the banking sector the best of luck and that the future is in their hands,” Al Rawahi concludes.